Carmen Douma running for Villanova University at the NCAA Track and Field Championships in Buffalo, N.Y. during the late 1990s. She won the 1500 metres.

Hespeler native Carmen Douma-Hussar is without a doubt the finest female middle distance runner Cambridge has ever produced. What’s more, she is one the finest in Canadian history.

A native of Hespeler, her parents Martin and Agnes were supportive of her running career. “They were very encouraging, but never overbearing, and at the same time being excited for me.”

From an early age she shone on the track and at cross-country events. In high school she was a standout at Woodland Christian High School in Breslau. There she developed into one of the best high school runners in Canada.

As her stellar high school athletic career was drawing to a close, she earned a scholarship to Villanova University in Pennsylvania, a private university just northwest of Philadelphia. Not only did her experience there exceed her expectations, she established lifelong friendships.

First and foremost, she had an outstanding running career at Villanova, where she rose to the top of the NCAA, winning three individual titles in the late 1990s.

“Villanova was one of the top middle distance schools and was definitely on my radar, but Krestena Sullivan went there, and she was a senior when I was a freshman. I knew her from high school, so that was also a big reason I chose Villanova because I knew she liked it.”

In 1998 Douma won the NCAA indoor mile title and the outdoor title over 1,500 metres at the national championships in Buffalo June 3-6. Her father, sister and grade school principal, Jake Vriend – a man who was instrumental in getting her involved in running – were in the stands.

“That was a pretty exciting race,” she said years later. “I think fondly of it now.” 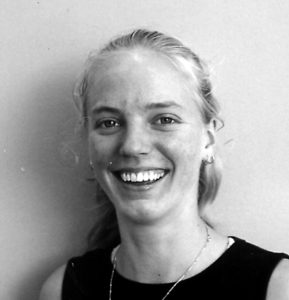 In 2000 she again won the indoor mile title; that same year she graduated from Villanova with a degree in education, and served as the assistant coach until 2005.

In 2001 she made her international debut for Canada at the IAAF World Cross-Country championships in Belgium, finishing 69th.

The next year she was 53rd at the worlds near Dublin, Ireland, and made a significant improvement the following year when she placed 37th.

Meanwhile, she was also improving her results on the track. In the 2002 track season she bettered her indoor mile mark to 4:38.02 minutes in winning the Gator Invitational, then set an outdoor best of 4:37.55 minutes in Falmouth. She also set a 1500 metre best of 4:14.60 minutes at the Georgia Tech Invitational.

That year she finished third in the mile at both the New Balance Games and the Boston Indoor Games, where she set a best of 4:35.94 minutes. She also won the 1,500 metres at the Harry Jerome Classic with a PB of 4:08.09 minutes and won the national title in the same event a month later.

It would set the stage for a banner year in 2004 in which she would begin setting Canadian records and become a world medalist.

Her years at Villanova had prepared her for a running career after graduation, and that year it all seemed to come together.

She had victories in the 1,500 metres at the prestigious Millrose Games in New York and the Boston Indoor Games.

Qualifying for the 2004 IAAF World Indoor Championships, she advanced to the final in Canadian indoor record time of 4:08.18, winning the silver medal behind Ethiopia’s Kutre Dulecha, who had set a world junior record in 1997 and won the 2000 world cross-country championships.

She had her best cross-country finish at the World Championships in Belgium when she placed 17th, which helped the Canadian team win a team bronze.

Focussing on the 1,500 metres, and competing on the European outdoor circuit, she won in the Netherlands with a personal best of 4:04.85 minutes and was runner-up at the London Grand Prix.

Finishing second at the national championships, she was selected for the Olympic team, a first for her. Advancing to the finals at the 2004 Athens Olympic Games, she ran a PB of 4:02.31 to finish ninth.

In 2005 she earned a fifth-place finish at the IAAF World Athletics Final in Monaco and had another banner year, winning the mile at the Millrose Games and setting her second national record.

She finished 25th at the world Cross-County Championships that year and was Canada’s top finisher. She won the national 1,500 metre title and was ninth at the worlds in Helsinki, Finland in August, 2005.

She was running fast; two weeks after the world final she ran a lifetime best of 4:02.29 minutes at the Rieti Meeting, an annual athletics event at the Stadio Raul Guidobaldi in Rieti, Italy that takes place in late August or early September. Previously one of the IAAF Grand Prix events, it is now part of the IAAF World Challenge.

In 2006 she won the Fifth Avenue Mile beating American champion Amy Rudolph, and ran in both the 1,500 metres and the 3,000 metres at the World Athletic Final, earning a fourth-place finish in the 1,500m and setting a PB in the latter.

She has won events all over the world, including the 1,500 metres at the Melbourne Track Classic in 2006, although she lost out in a tactical 1,500 metre final at the 2006 Commonwealth Games, finishing fifth. She was seventh at the IAAF World Athletics final in Stuttgart, Germany, and sixth at the World Cup at Athens. She had a season’s best of 4:03.82 for the 1500m at the Meeting Gaz de France in Paris and won the national title.

She was still running internationally in 2008, the year she became pregnant with her first daughter, who was born in July, 2009. A year later she began competing again, winning the Canadian 10K road title that October.

But by then she was missing one of her biggest cheerleaders. Her father Martin died after collapsing in November 2008 while out on a run with her mother, Agnes.

“I feel like I’m a different person now than I was in 2008,” she said in June 2012 as she was preparing for the Olympic qualifier in Calgary. “At the trials in ’08, he was there to give me a hug. My mom and dad were the perfect cheerleaders,” Though her father had passed away in 2008, his supportive nature was with her still.

Douma-Hussar was nine times an All-American at Villanova, and a three-time NCAA individual champion. There were 15 Big East Conference individual titles; she also made her mark at the prestigious Penn Relays where she was a member of three Championship of America teams.

When Douma-Hussar left Cambridge for big-time American college athletics in the fall of 1996, she couldn’t have dreamed the breadth of the running experiences to ensue. She was, in many ways, the perfect successor to other legendary area runners who preceded her.

Late in her career, although she had been running, and training since her early teenage years, she still loved competition. Former Guelph Track and Field Club coach Albert Tschirhart said: “She’s the embodiment of internal motivation. She’s not racing against other people, only herself. I don’t think we’ll ever be in a position to count her out.”

Just prior to the Olympic qualifier, she told The Record that even after becoming a mother, the competitive fire still burned, and that running was becoming fun once more.

“I’ve got that competitive spirit again, and that’s the fun part about it all,” she said. “I’ve got that fire again. It’s like a full-fledged forest fire.”

And although she gave it a good shot, at 35, another Olympics was not to be when she came up short at the trials in 2012. She knew it had been a long shot, but she was game, and gave it her all, like she had always done.