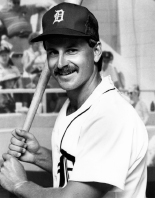 Although Canada lost its first two games, they came back to beat the eventual gold-medal winning team from Japan. “I got a lot out of that national team experience,” he said. “We played all over the world.”

In 1991, when the Braves won the NLCS and went on to play the Minnesota Twins for the World Series, Braves owner Ted Turner flew McCullough to Minnesota to see a couple of the away games. He also got a championship ring and a share of the playoff money.

Being the assistant field director for a major league team – the NHL’s Atlanta Falcons also played at the stadium before moving to the Georgia Dome – was demanding. “During the baseball year we’re here every day,” he said. “But most of the time I enjoy going to work.”

That, despite the pressure of having to make the grounds perfect. “We’re on TV every night,” he said at the time, “and the grounds have to be perfect. Big games depend on it.”

When the Olympic Stadium was constructed for the 1996 Olympics, the Braves moved into their new home across the street from the old Fulton County Stadium.

McCullough and his boss, the field director, who had hired him, eventually left the Braves in the late 1990s and McCullough continued to live in Buford, Georgia.