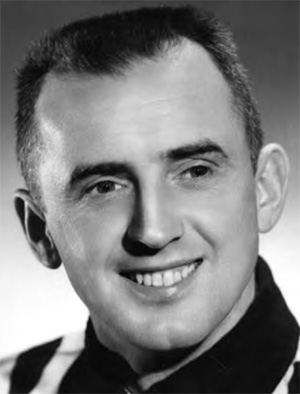 When Neil Armstrong was elected to the Hockey Hall of Fame in 1991, he received many congratulatory notes and cards from a lifetime of friends and colleagues, including Gordie Howe. Howe called the nomination long overdue.

Born in Camlachie, Ontario, near Bright’s Grove, he moved to Galt with his family when he was eight years old. That was the fall of 1939.

“War had just broken out, and going to Galt was, to me, getting closer to the war. Galt was out east, and that’s where the war was.”

Armstrong was helped along the way by many people like Cec Dunn and Art Spencer, but two people, both referees, stand out in particular. One was Ted Elmes, and the other was Larry Lewin.

“They asked some of us young kids if we wanted to referee, and I said yes. They paid 50 cents a game, and after about four games, I thought I was rich.”

The referee’s association would meet at Fulton’s Bike Shop. There was Bill Fulton, Cec Dunn, Bill Brethauer, Wes Lillie and others, in addition to Armstrong. 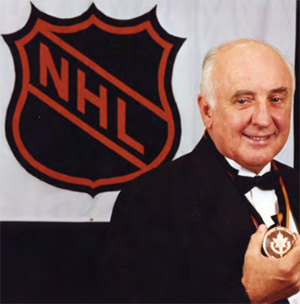 Among his close friends in Galt was Wiggie Wylie. The pair worked for Roy “Gunner” St. Clair’s men’s shop on Main Street.

By then, Armstrong had taken up golf, thanks to the encouragement of Normie Himes.

“One day we decided to go to a golf tournament in Strathroy. Around Paris, they discovered neither had mentioned it to Mr. St. Clair. “Well, it’s 9:30, do you think the Gunner’s got the store open?” asked one of them.

“Did you tell him we were going?” replied the other. “No, I didn’t tell him. I thought you told him!” When Mr. St. Clair showed up at 10:30 that morning, the store was still locked.

Another day he and Wig went to the pool hall for a quick game at lunch. They were still there at 2 p.m.

Neil gradually worked his way up the ranks, doing the Memorial Cup finals in Toronto before moving up to the NHL in 1957 on a part-time basis.

He became a full-time NHL official in the 1958 season at the age of 23, which was considered too young by some people.

Nevertheless, he gradually won over his doubters, and for the next 21 years – 1744 league games – he was a familiar face on the NHL circuit.

Carl Voss was the referee in chief at that time, and Clarence Campbell was the league president.

“I got a phone call from Carl asking if I’d be interested in working a couple of exhibition games, saying he’d likely see me at one of them.”

“Can you make it to Toronto Saturday night?” he was asked.

Armstrong said he could. “I took my OHL sweater. He (Voss) walked in – it was November – and gave me my sweater.”

It was a memorable game. “All hell broke loose with about five minutes to go,” said Armstrong. “I thought it was going to be my first and last game.”

But he needn’t have worried. He never refereed another game outside the NHL again.

That first game one of the players came up to Armstrong, after Armstrong had grabbed him, and said, “Kid, you’re really in trouble. You’ve broken my arm.”

Armstrong, looking at the way the player held his arm, believed him. He had fallen for it. He did 12 games all told that season, in Toronto, Detroit and Chicago, and then the next year, he opened in Boston. His first two years were Rocket Richard’s last two seasons. Most of his career was with a six-team league. He found that the better the player, the easier the player was to deal with. “The guys leading the league in conversation also sat on the bench.” One player who was notorious for his hatred of officials was Freddy Glover. But Armstrong had been a stick boy with the Galt junior teams and knew Glover from those days. Years later, other players noticed how Glover was friendly with Armstrong, and wondered how he did it.

“You have lots of memories,” he said. “Your first league game, your first playoff game. When the Russians came over to play the NHL teams.”

In 1980, two years after he retired from the NHL, Armstrong joined the scouting staff of the Montreal Canadiens. “You wondered why you were doing it at times, the places you went.” Yet it was fun, too, and took him to destinations around the globe.

He remained with Montreal until 2000.