Orlo Myshrall, born in Toronto, grew up in New Brunswick (Woodstock H.S.), but during his peak years as an archer, he called Cambridge home.

As a youngster, he recalls, “shooting was everything, an growing up on a farm, we

always had firearms. I was never any good at hockey or golf and things like that, but for some reason, I could shoot.”

Eventually he got interested in 3D archery, an outdoor format in which archers walk a target course in the woods or fields, or both, taking aim at 3D foam targets of various game animals such as deer, bears, leopards and antelope. Archers shoot at targets at various distances in varying settings. It simulates lifelike situations for bowhunters.

Myshrall took a liking to the sport from the start. “I went out to some tournaments and started shooting, about 1993 or ’94.” 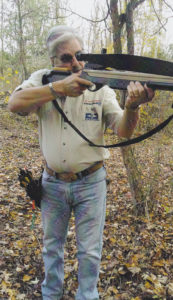 He said there are two important skills it tests. One is the ability to shoot the targets, but the other is the ability to accurately guess the range or distance. He quickly showed an aptiutde for the sport. It didn’t seem to take me too long to catch on,” he said. “I was quite at home in the sport.”

By then he was living in Cambridge, where all his children grew up, and was a member of the Galt Sportsmen’s Club and later, the Pioneer Sportsmen ‘s Club in Kitchener, where he eventually became president and archery director.

In 1998 he finished third at the Worlds in New York, and by then, had gained a reputation as one of the best in the world. “The competitors were all at a very high level and there were a lot of good shooters out there,” he said. He had done extremely well, but had no illusions that he would win the world title one day.

“I was in good company and I felt fortunate that I had finished third.”

Eventually he became president of the Ontario Archers Association, but his career reached a pinnacle in 2002 when he won the World Crossbow Championship in the U.S.

That year he was almost unbeatable. The world championship was on a mountainous course in West Virginia and ropes had to be used by archers to get to some of the 40 targets.

Through the year he competed in 23 tournaments, earning 22 first-place finishes. His other result was a second-place finish. these included the Ontario Triple Crown.

To advance to the Worlds that year there were more than 200 qualifying tournaments, with only the top archers receiving an invitation. Myshrall was the Ontario cross-bow champion that year and also won the Canadian Open title the week prior to the Worlds.

His middle daughter, Meaghan Rahn, who still lives in Cambridge, has also done well in the sport, winning the senior women’s Canadian Open title the same year he won. “She also won the Ontario championship and Ontario Triple Crown,” he said.

Still, as good as he had been leading up to the Worlds, the competition was daunting.

“I figured if I could finish in the top 10 I’d have bragging rights. I never expected to win it. It just seemed that I didnt put any pressure on myself. I was just tremendously

relaxed, and in fact, it was almost surreal how relaxed I was. It was like going out with your buddies for a round of golf.”

Perhaps that was the reason he did so well. “I just went out and had fun and it

seemed to work for me.”

It was icing on the cake for what had been an incredible season. “I would have been

very satisfied to be able to say I had finished in the top 10 in the world.”

It had been a grueling season, to be sure. Twenty-three weekends of tournaments, countless hours of practice. He had reached the top of the sport, so it was not surprising that he scaled things back in subsequent years. He had achieved evrything he had set out to do, and then some.

“I had spent a lot of time practicing on the range, and making sure the equipment was right, and working on any little quirks that I had to improve upon.”

Offered sponsorships, he declined, not wanting to be beholden and obliged to compete.

“There were some other things I wanted to do with my life,” he said. “I didn’t want to put that kind of pressure on myself. Once you accept sponsorships it becomes more like a job. It’s an obligation you have to live up to.”

Although he loved to compete, he had done it all, and he was satisfied with that.

There had been a few Canadian Open championships, Ontario championships and Ontario Triple Crown titles. There was the third place finish at the Worlds in 1998, and the culmination — the World title — in 2002.

And through it all, despite the hard work and the time it took, the years had been fun.

“At the Worlds in 2002 we were going up the hill — they host these at ski resorts due to the number of people — and one of the stationary archery targets started walking away.”

They were initially dumbfounded, but it only took a second or two before they realized it was a very real mountain lion.

“The real appeal for me of 3D archery,” said Myshrall, “is not only the ability to shoot but you also really have to hone your skills on guessing the range, because an arrow will drop over six feet in 50 yards,and you’re shooting at a bullseye that could be as small as a nickle in the case of a 3D turkey.”

If the archer is off by a yard or two, he’s completely off of the bullseye.

“I really enjoy that part of it, with the two skillsets.”

He’s lost a lot of vision in his right eye since his peak years, and given that he’s right-handed, this has presented problems.

“So now, if I go out with my bows — I’ve tried swapping my crossbow over to the left side, and I can shoot it, but certainly not like I could normally with the right hand. But I do have a couple of traditional bows that I can shoot right-handed because you’re not looking into a sight, and it’s instinctive shooting more or less.”

Many of his children continue to live in Cambridge, though he now lives in Aylmer,