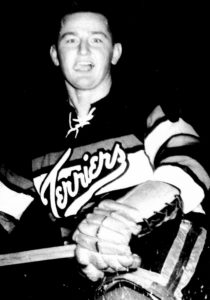 Born in Buchanan, Saskatchewan to Michael and Dora Kowalchuk in 1934, the 5’10” 180-lb right winger gained a reputation at an early age as a top prospect.

Peter was the third youngest in a family of eight, and when the family moved to Ontario, he played minor hockey in North Bay.

Jim McBurney led the team in scoring that year with 61 goals and 35 assists for 96 points.

After his stint in Jr. A, Kowalchuk played for the Stratford Indians of the OHA Sr. A circuit in 1955-56, where he scored 16 points in 32 games.

He then played a little for the KW Dutchmen in the same league the following year, winning an Allan Cup, before being traded to Stratford. 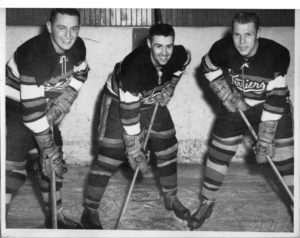 He also coached the Galt Lions Jr. B team, which had a young Hespeler player by the name of Russ Gillow in goal. Gillow is a member of the Cambridge Sports Hall of Fame.

From 1960-62 Kowalchuk played Senior A for the Galt Terriers alongside Darryl Sly, Boat Hurley, Harry Neale, Wiggie Wylie, and Butch Martin, among others. He coached and played in Italy in 1963, and then was back with the Galt Hornets in 1963-4.

He suffered a broken leg with the Hornets while scoring the winning goal in a playoff game against Oakville, but returned to the Hornets in 1967-68, before retiring halfway through the season. The Terriers, coached by Lloyd  Roubell for the first two years and by then by Bill ‘Wiggie’ Wylie the next season, were one of the top Senior Amateur hockey teams in Canada during their heyday.

Kowalchuk was a key member of the 1960-61 Allan Cup champion squad.

The Terriers defeated the Windsor Bulldogs in the O.H.A championship and then went on to win the Ontario Championship with a sweep of the Northern Ontario Hockey Association Rouyn-Noranda Alouettes. This advanced them to the Allan Cup Finals, where they recorded another sweep of the Amherst Ramblers from the Maritimes.

Late in the season the Terriers had Amherst’s number, beating the Nova Scotia champs 7-0, with Kowalcuk scoring the winner – his third goal in as many games – at 11:26 of the first period. Goaltender Harold ‘Boat’ Hurley earned the shutout, while teammate Don Rope had a four-point game.

By winning the Allan Cup, they were awarded a trip to represent Canada at the 1962 World Championships in Colorado Springs, Colorado. Len Gaudette, manager of the team, knew the worlds would be a tough test.

“I said a month ago that we could finish third in the tournament,” he said, “but that was a month ago. Harmony and team spirit made me change my mind. It would take a very strong team to take the title from us.” 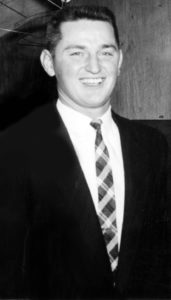 The team made an 11-game western exhibition jaunt en route to Colorado Springs, with Don Rope, Boat Hurley and Jack McLeod joining the team in time for their game at Fort William (Thunder Bay). Ted Maki and Bob McKnight would also join the team later.

The Terriers squad included Tod Sloan, who a year earlier played with the Chicago Stanley Cup champs. They capped off their western Canada tour with a 3-1 win over the Trail (BC) Smokeaters, defending world champions.

They were flying high, and seemed to be at their peak, but Sloan warned: “It would be nice to be on a professional and amateur world championship team within 11 months, but don’t let those Europeans and Americans fool you. It won’t be an easy task.” 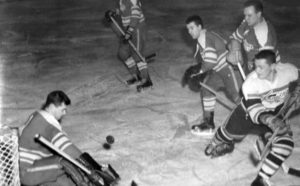 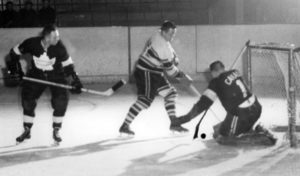 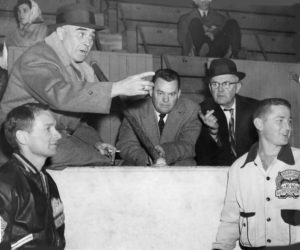 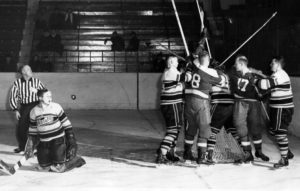 Keenly observant of the competition, Roubell said it was Sweden he most feared. “They have a good club, and with Czechoslovakia and Russia out, they’re the team we must beat.”

It was a whirlwind trip and the Terriers had high hopes. They wore distinctive bright red coats and sported white felt hats, which they changed for white 10 gallon cowboy hats in Colorado Springs, but playing at high altitude (6200 feet) was difficult. The Terriers fell 5-3 to the Swedes after a young Swedish goalie proved almost unbeatable. Though outplayed by the Terriers during the game, twice the Swedes scored when the Terriers were two men short. In the end, the Terriers took silver, behind Sweden. It was a bitter disappointment for players and coaches alike, including Kowalchuk.

In the early 1960s, when Kowalchuk wasn’t at the rink for games or practices, he managed a sporting goods store. He also coached minor players, including ball players.

Kowlachuk — a steak-roast-beef, apple pie and cheese man — would typically eat a couple of eggs, salad, and perhaps tea on game days. Like a lot of players, he was tense before a game, especially if it was a playoff game.

After games he would unwind by joining other players at the Booster Club for a sandwich and get-together.

In his spare time he would ski, fish and golf. In the summer of 1961 he won the Evening Reporter Trophy for a hole-in-one on the ninth at the Waterloo Golf and Country Club (forerunner of the Galt Country Club).

Pete Kowalcuk died at his cottage in Long Point on July 2, 2016.