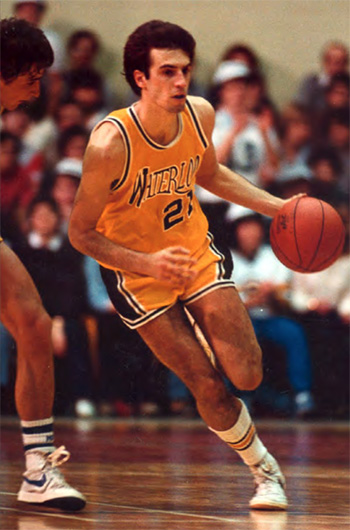 Former University of Waterloo basketball coach Don McCrae knew there was something special about Peter Savich several years before he recruited the young star to play for the Warriors.

He was just a junior at Preston High School when McCrae first heard of him, and in the ensuing years, McCrae followed Savich with great interest.

Savich was the kind of player coaches wanted. Talented, tall, and loaded with natural talent, Savich had the ability, said McCrae, to play in the States as a two-guard.

But Savich, a driven athlete concerned with his education, chose to go to Waterloo, to no one’s surprise.

McCrae was widely regarded as one of the top university coaches in the country. That was important to Savich. But so were academics.

“There were two reasons I chose Waterloo,” said Savich. “First, UW had a top international reputation in mathematics, every bit as lustrous as that of Stanford, MIT, and Cal Tech. Second, UW had one of the best basketball traditions in Canada, including top coaching and rabid fans.”

McCrae was more than glad to have him.

His first year was a portent of things to come. That year Savich led the team in scoring.

Usually freshmen don’t do that,” said McCrae, who added that in Savich’s career, “he led the Warriors in scoring all five years.”

The latter honour, named the Mike Moser Award after the late Warrior standout of the same name who died in the mid-1970s, was a rare distinction. Savich was presented with the award at the Final Four tournament in Halifax.

“It was a tremendous honour,” said McCrae, “particularly because it’s the Mike Moser Award, and only one player wins it a year.”

In 1986, when Savich’s uniform (No. 21) was retired by the university, Savich joined an elite group of three whose uniforms have been retired. Moser was one of them. And Jan Laaniste, a star from the late 1960s, was the other.

But for all of Savich’s talent, McCrae admitted to having some concerns during his freshman year.

“It took us a while,” said McCrae, “and in the end, both of us con- ceded some ground. He was a great athlete who needed some room for his talent to surface.”

Savich was “very candid in his observations. Some coaches don’t like that, but I did. We didn’t waste any time beating around the bush.

We got the air cleared very early.” Savich, at 6’4”, was the proto-typical swing guard, said McCrae. The Warriors had never had a better shooter. And his ball handling was exceptional. “He had the ability to show the ball and take it away while he was driving to the basket. We used to put him in the high post at money time.”

In 1985 Savich played for the Canadian national team on its tour of China.

“He was a pure shooter,” said McCrae. “An absolutely pure shooter. And he was one of the fastest players we had.” That speed, coupled with his outstanding ball handling, meant that when he drove to the basket, he either scored or went to the foul line. “That’s a rare trait,” explained McCrae.

Savich graduated in the top one per cent of his class, making the Dean’s Honour List every year. Yet initially, he had McCrae worried over his study habits.

“He was the complete opposite of Mike Moser,” said McCrae. “Mike would get things done as soon as he could, and then have free time to devote to basketball. But Peter did only a few menial tasks until we broke for Christmas exams, and then would become almost a recluse. I spoke to him about my concerns his freshman year, and he said, ‘Don’t worry about me coach.’”

It soon became apparent that McCrae had nothing to worry about.

“There you had two great students who were diametrically different in their study habits.”

After playing pro ball in Greece for a year following graduation, Savich earned a law degree from Stanford before assuming the role of director of business and legal affairs for VXTREME, Inc. of Sunnyvale, Calif. prior to its acquisition by Microsoft in 1997.

Clearly, success followed him off the court. In his prime he was one of the most gifted basketball players in Canada. “If you want a shooting guard,” says McCrae, “you should clone Peter Savich.”