Six-time Dominion Champions in the decade of the 1930s

Male or female, professional or amateur, backlot or big-league, no Canadian team has ever dominated their game like the Preston Rivulettes did for a decade in the 1930s.

In an estimated 350 games the Rivulettes lost just once, to Edmonton, in Edmonton, with the Dominion title on the line. (It was a two-game series; they tied the other game). 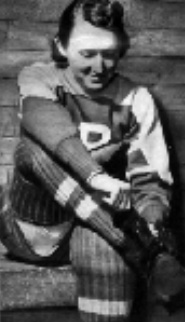 The Rivulettes had gone west with a short-handed team, with many of them suffering from the flu. “In Edmonton,” said star player Hilda Ranscombe, “the atmosphere was so different and we went with nine players and three were sick. Myself, all I did on the ice was cough. The girls played good hockey but we only had one spare.”

Losing 2-1 to Edmonton, the referee came into the dressing room. “Sorry girls,” he said. “I couldn’t let you win.”

Still, with Ranscombe, who was described as the best player in the country, and others such as her sister Nellie, the goaltender, the Schmuck sisters – Helen and Marm – Gladys Pitcher, Helen Sault, Myrtle Parr, and later, with young Kitchener standout Ruth Dargyl (now Collins), the Rivulettes won 10 Ontario titles, 10 Eastern Canadian championships, and were six-time Dominion champions.

Few teams anywhere have gained the renown of the Rivulettes. They played before packed arenas, both in Preston, at Galt, and across the country.

There was no world championship as the decade of the ‘30s came to a close. A European tour was cancelled when war intervened. The classy Preston Rivulettes, finest women’s hockey team anywhere, disbanded. So ended a remarkable era in women’s sport.