Cambridge’s Rob Ducey did what few Canadians had done before him – make it to the major leagues. By the time he retired in 2001 he had played in 13 dif- ferent seasons in the Major Leagues, the longest career of any Ontario position player since Thunder Bay’s Jeff Heath played 14 seasons from 1936-1949.

Along the way he accomplished some remarkable things, including playing for Canada at the 2004 Olympics, winning the Tip O’Neil Award as Canada’s top baseball player, and playing alongside of such stars as Dave Stieb, Roberto Alomar, Fred McGriff, Ken Griffey, Jr., Nolan Ryan, Randy Johnson, and Curt Schilling, to name a few.

Even as a youngster, Ducey was quick on his feet, was a gifted fielder possessing natural talent, and could throw and hit.

He was first noticed by the Cambridge Terrier’s Herb Schiel when he was still playing softball as a 15-year-old.

Three years later he signed his first pro contract, and by the age of 21, just five years after playing his first baseball game, he played his first Major League game. He was 21.

When Ducey was 15 it was suggested he play midget ball for the Cambridge Colts as he was too young to play Junior — he played a few games for the Junior Bulldogs — , even though his ability was evident even at that age. Soon he was playing for the Junior Intercounty Bulldogs.

Said longtime friend Al Findlay: “If it wasn’t for Ed Heather, Rob would probably not be where he is today.”

He left home in 1983 to play baseball for Seminole Community College in Florida. 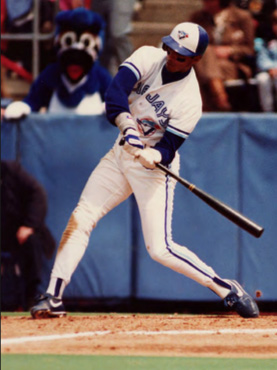 Soon he was being scouted by Major League scouts. Along the way he would help out part-time at the awards store. “Robbie deserved everything he got,” said Findlay. “He had the heart and drive, and everything about him was aces.”

Walt Jeffries, a scout with the Jays, first noticed him and he was signed as a free agent in 1984, and he was sent to the Jays minor league team in Medicine Hat, Alberta. That year he won the MVP award.

“Rob had natural ability,” said stepfather Ed Heather. “He liked to play, and worked hard at it. He had great instincts for the game, something that can’t be taught, and was coachable. He enjoyed the game.”

Ducey made the adjustment from softball to baseball in stride, though it took a little while for his arm to develop. When he was poised to crack the roster of the Blue Jays, after having spent a few years in the minor leagues, the task seemed almost insurmountable. He would be vying for a job with he team that had, as it was commonly referred to at the time, “the best outfield in baseball.” That outfield included George Bell, Devon White and Lloyd Moseby.

Yet Ducey, the young Canadian, met the challenge and made the final roster for the Jays. He split time with the AAA Syracuse farm team to get playing time, and when he finally seemed to be on the verge of great things, suffered a devastating knee injury at SkyDome that altered the course of his career.

That first year with the Jays saw Ducey hit the first home run (Sept. 14, 1987) in the team’s record-setting spree of 10 home runs — and all-time high — in a single game.

Among the other highlights of his career include: