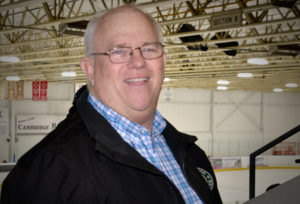 Growing up in Galt, Rob Hedges couldn’t help develop an early attachment to two Canadian sports shrines, both of which were in his hometown. Today, after 40 years of active involvement in minor sport as a volunteer, those shrines remain a big part of his life.

Dickson Park has been called Fenway of the North, while Galt Arena Gardens is one of the oldest continuously-operated hockey rinks in the world.

“I played a lot of ball at Dickson Park over the years,” Hedges said. “I love the uniqueness of the park. And how can you not love Galt Arena? There are lots of these four-pads in other communities — which we do need — but they are glass cathedrals and don’t have the same atmosphere as Galt Arena.”

Hedges’ enthusiam for minor sport has helped guide the development of scores of young hockey and ball players for four decades.

“He started coaching ball with us in 1980,” recalls John Corbett, “and he got into that because he was coaching Johnny (Corbett) in travel hockey. In addition to baseball, he’s coached a fair amount of hockey along the way.”

Hedges coached with Corbett for several years. “He’s still coaching, as am I,” said Corbett, “but he’s now coaching his own son in Minor Peewee. This is their year to do the big thing at Cooperstown.”

Corbett says Hedges is a good man. “The kids like him and he works hard for them and has over all these years. His daughter got involved in hockey and he’s been heavily involved with her teams and continues now as head of the Rivulettes professional team based out of Preston.”

Over the years he’s been involved with a wide range of teams — hockey and baseball most prominently — and like many builders, he was a talented athlete in his younger days. 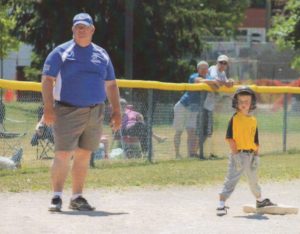 Early on he played baseball, but got an interest in football while at Galt Collegiate and went on to play with the University of Western Ontario Mustangs.

Though most at home on the ball diamond and at the rink, he has indulged in other activities, like being a member of the Cambridge Sports Awards Selections committee.

Hedges played football and basketball at GCI, and dabbled in a few other sports such as track and badminton, graduating in 1977. Bev Hall was the Phys. Ed. head back then, and one of his favourite teachers from that era was the late Wayne Stokely, a Phys. Ed. teacher and coach.

At Western, Hedges played football on the offensive line for Darwin Semotiuk’s Mustangs, one of the best university teams in the country.

After two years at Western he returned to Cambridge. “I started coaching with Mike Kearns. He helped me with coaching baseball, but first I had to help him with hockey that winter. He (Mike) eventually quit baseball, but he and I established a good partnership for the next 10-12 years in the hockey world.”

Hedges originally got to know Kearns at the end of high school and they became good friends.

Hedge’s favourite sport? There is little hesitation in answering “baseball.”

“It’s baseball in the summer and hockey in the winter.”

Both Tina, his first wife, and Mike died young, tragedies that still tug at his heartstrings. They were devastating losses.

He’s met a lot of good people through minor sport. “The kids are why you do it.” But others, like Kearns, Corbett and Bruce Maycock were key guys. “After Mike passed away I kind of got away from coaching and was doing more of the managing.”

Today, working alongside Geoff Haddoway with the Rivulettes, has been another great experience.

There have been plenty of highlights, especially seeing his two children grow and develop. Jessica, 21, is in her third year at WLU, while Ben, 11, plays hockey and ball.

Other highlights include winning an OBA title with Corbett and a talented group of players, as well as coaching hockey and winning a Sutherland Cup with Kearns.

“We won the Sutherland Cup (with the Kitchener Jr. team) and were finalists the following year,” said Hedges. “That was the year Mike died, midway through the year. His death took the wind out of our sails, but they (players) managed to make it all the way back to the championship round. They were going on adrenaline toward the end of the season and into the playoffs. By the time we got to the Sutherland Cup, emotionally they were done. It was a pretty tough year.”

Both Kearns and Tina set an example that has helped inspire Rob to this day, as did simply watching the young players after Mike’s death, the way they picked themselves up and persevered. “I’m still in awe of those kids today,” he says, tears welling up. “It was really something to watch.”

In the same vein, he has learned a lot from the children he’s coached over the years. “I look back, and I learned so much from the kids — the joy that they have playing the game — and seeing the smiles on their faces makes you come back the next day.”

He’s been so involved in sport, both summer and winter, that he has little spare time. “Between work and my sports involvement, there’s not a lot of spare time.”

One of the rare times he took off was with his wife Deb last fall. They went on a vacation  to the Dominican, which happened to coincide with the Cambridge Sports Awards. He didn’t know if at the time they booked their vacation, but he was going to be presented with the Don and Benita Rope Sports Contributor Award. Fortunately, his children accepted on his behalf.

“It was a rarity that I had something planned like that at the same time.”

He credits the two ladies in his life with his success. “I couldn’t have done any of this without the support of Tina, my first wife, and Deb. Without them there’s no way I could have done what I’ve done. They allowed me to follow my passion.”

His son is still actively involved in baseball and hockey, so he has no plans to slow down any time soon. I coach him in baseball and he’s playing travel hockey so as long as we’re still chasing him around, retirement in not on the radar. Unless they kick me out, I don’t see it.”

Besides, as he notes, “I’ve been active for 40 years like this, so I’m not sure what I would do if I went cold turkey.”

He is proud of being a founder of the baseball high-performance Ontario Terriers (15-18-year-olds), with Mississauga’s Dan Thompson and Guelph’s  John Benvie. Cambridge Sports Hall of Famer Ed Heather was also involved for many years.

“I was on the ground floor of helping to develop that organization,” recalled Hedges. “I’m no longer involved, but they have probably grown into one of the best high-performance baseball programs in the province. So that has been a highlight for me as well.”

The team was based out of Cambridge with the name coming from the old Galt Terriers. The team is now located in Mississauga at the Baseball Zone, with some of the Who’s Who in amateur baseball circles from around the country.

“We established ourselves in the Intercounty area and everyone liked the name Terriers — they were dormant at the time — so we thought we would honour them.”

He has given decades to the minor sports world of Cambridge, but he is one of those volunteers who will tell you that whatever he gave, he got back much more.

“He’s spent a lot of time helping kids, in hockey and baseball, over many years,”summed up Corbett.