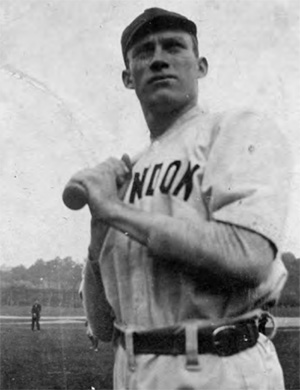 Robert ‘Bush’ McWhirter was from the old school, and it was a great day for baseball in Galt when he came to town to coach the Galt Terriers in 1921.

McWhirter, a Toronto native who had played professional baseball with the AAA Toronto Maple Leafs – he turned down an offer from the rival Baltimore Orioles – and was highly recommended, took over the reigns and helped develop countless local boys into top-notch players.

One of those players, the late Jack Murphy, who played for McWhirter and had a lifelong interest in local baseball, considered McWhirter to be the single most important factor in the rise of baseball locally.

McWhirter, a catcher, turned professional in 1909 with the Toronto Maple Leafs of the International League. At the Maple Leaf training camp in Macon, Georgia, his arm went “dead,” killing a promising career.

He returned to Toronto to start a new career as a coach and manager.

It was Murphy’s belief that McWhirter paved the way for Galt to become a hotbed of baseball in the 1920s and 1930s. In his first three seasons as Galt coach, the Terriers won back-to-back Ontario championships (1922, 1923).

The following year (1924) the Terriers were beaten out in the provincial finals by the Toronto Oslers.

McWhirter was one of the most colourful characters in the league, and was a major drawing card in ball parks throughout the league. Indeed, he was so dynamic that his Terriers became known as “The McWhirter Gang.”

After a couple of seasons away from ball, he returned to coach the Preston Riversides, then guided the Guelph Maple Leafs to the Intercounty title.

In 1933 and 1934 McWhirter led the Southampton intermediates to the provincial finals, before taking a three-year hiatus.

In 1938 he led the Galt juniors to the provincial finals.

The following year he was placed on suspension by the Intercounty Association. He had refused to field his juniors for a final game against Guelph because Guelph allowed spectators to sit in their dugout. This was con- trary to the rules and McWhirter, a stickler for protocol, was steadfast in his objection. It would be six years before he was reinstated.

When he returned, he umpired a little, and guided the 1947 Galt Terriers to the Intercounty semifinals before calling it quits on a long baseball career. That season he inserted himself as a pinch-hitter in the semifinals, tapped a single into left field and then stole second. He was 57 years old.

“He was quite a fiery sort of fellow,” recalled longtime Cambridge resident and sportsman Jim Broomfield. “He was probably the best coach the Terriers ever had.”

Wes Lillie, a Galt native who went on to play junior ball before moving up to the Terriers, agreed with Broomfield’s assessment. 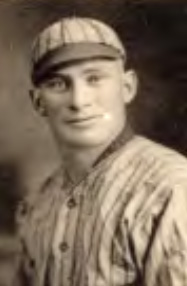 “He was a firebrand,” said Lillie,” with plenty of fight.” The stories were legion, though most are now long forgotten. Some Galt fans would pay money just to see McWhirter get ejected from the game. To them, that was worth the price of admission. On more than one occasion he was thrown out by the “ham-and-eggers” umpires at Dickson Park, went to the nearby YMCA at Queen’s Square where the players all changed, and got into his civvies, before returning to the park, purchasing a ticket, and coaching the team from the grandstand.

Umpire Oscar Hett once had him removed from the game, and from the grandstand and park. One of the most notorious episodes involved a riotous episode in St. thomas against the Tom Cats. The Galts had taken their own supply of water for the game after charges that St. Thomas had tampered with their water – they claimed St. Thomas had medicated their water, making them sick – during a previous game.

Bush got involved in a ruckus with a vocal Tom Cat fan, and was jailed. Fit to be tied, the volatile Bush was fuming, stamping up and down the cell until he was released following the game. Galt had had more than a little success on the ball diamond prior to his arrival, but his presence and his knowledge of the game inspired young and old alike.

Coincidentally, his arrival in Galt came just a few years after the Intercounty Baseball Association got off the ground in 1919.

“Bush was respected,” said Broomfield. “Those who didn’t respect him probably feared him.”

McWhirter made a lasting impression on a young Brian Heggie in the 1950s. “He was fiery,” said Heggie. “I thought he was Galt’s Casey Stengel. He was very assertive and I remember him going to-to-toe with many an umpire.”

No wonder McWhirter was described by one reporter as “probably the most colourful coach to ever step on a ball diamond in Ontario.”

Under McWhirter’s direction, the Terriers took on the look and feel of a pro club. They had practices almost every night at Dickson Park, which was unheard of in those days. His long hitting and fielding sessions at Dickson Park between games became legendary.

Said Broomfield: “He was a good disciplinarian. He wouldn’t accept any nonsense.”

McWhirter worked closely with Laurie Poore, the coach of the Galt Robin Hoods junior team. Poore was a great coach with the junior team, and the two co-operated to allow the junior players to constantly feed the big team.

The Robin Hoods, named after Buck Payne’s Robin Hood Service Station at the corner of Water and Queen Streets (Parkhill Road), turned out several outstanding players who graduated to the Terriers. Payne was the team’s sponsor. McWhirter helped Poore, and between the two of their teams, there was never any shortage of talented ball players in town.

Often the Robin Hoods would win Intercounty junior laurels while the Terriers would do likewise in the hotly competitive senior ranks.

Several players would go on to distinguish themselves, either in the sports arena or in business. Normie Himes became a star with the NHL’s New York Americans, while Wiley Wilkinson became a leading citizen and businessman in Rochester, New York.

Some distinguished themselves in both areas. J.J. McFadyen, the team’s manager, became president of both the Galt Malleable Iron on Shade Street, and the Ontario Hockey Association.

Bush McWhirter played no small part in their success. He instilled in his players that proper deportment and dress was essential. Though criticized, at times, for his deportment on the dia- mond, he held the game of baseball as sacrosanct. He drilled his proteges to dress and behave in an impeccable manner.

As the late Galt reporter Stan Markarian noted, “Woe unto any player who who dared to parade on the diamond at home or away with uncut hair, unshaven, capless or in other improper dress.” It was all part of the success mentality. Said Markarian: “He shunned a defeatist attitude.”

“He was very regimental,” said Broomfield. “He was all baseball.”

Away from the diamond, McWhirter worked as a welder and fitter at Sheldon’s for a number of years until his retirement in 1956. Though he demanded that his children, and their children, do their best, Bush was mild-mannered and quiet spoken at home, a stark contrast to his high-spirited on-field demeanor. His wife, hearing stories of her husband over the years, could scarcely believe them. She refused to attend games because she just couldn’t believe all the things that were said about him.

He had led the Galts to be regarded as the powerhouse team of the 1920s, and had arguably done more for baseball in this town than anyone before.

The combative Terrier leader died on May 3, 1964 and is buried in Mount View Cemetery.