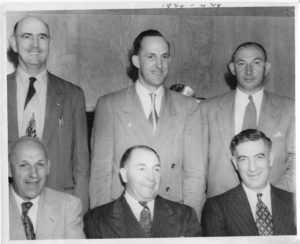 When Thomas ‘Dubby’ Duvall died at the age of 67, the community lost a true champion of minor sports.

One of 18 children born in Thorold, Ontario to Mr. and Mrs. Benjamin Duvall, he came to Galt as a young boy and lived there until moving to Hespeler for the final 28 years of his life.

His father was a lumberjack. He learned to skate initially, as a youngster, with his older sister’s figure skates. He may have taken some ribbing for this, but as he grew, he could take care of himself on the ice.

Working as yard foreman at Muir Fuels in Galt for 33 years, and later, for St. Mary’s Wood Specialties in Hespeler, as well as Artex Wollens, he retired only when ill health forced it upon him.

But it was what he contributed to the community, outside of work, that made him such a valuable sports builder.

Known in the area as Mr. Hockey, Duvall had a longtime involvement in the sport —more than half a century — but was also passionate about softball.

Duvall was also one of the early organizers of the famed Galt Terriers Sr. A hockey club  in the late 1950s and served as vice-president for four years. The team won the Allan Cup in 1960-61 and represented Canada at the World Championships in Colorado Springs.

Throughout his sports career, he was known and respected. An honourary life member of the Royal Canadian Legion, Hespeler Branch 272, Duvall was also a professional wrestler. His interest in wrestling began when he started to wrestle at the old Galt YMCA at the age of 12. By 1940 he was wrestling professionally part time.

Shortly after taking up wrestling as a young boy he pitched his first organized softball game at age 16 for the Waverlies in the Galt City League. He continued pitching for the next 23 years, in addition to coaching softball for years.

He loved sports, and played organized hockey for more than three decades, participating in his first hockey game as a youngster at the fabled Queen Square Arena where the public library now stands in Galt. Many of the game’s best hockey players played there, including the famed Auriel Joliat.

At age 14, just a few years before Galt Arena Gardens was built, Duvall played for the Galt Pups junior team. The war had just ended and the curling club, which sat next door to the Queen’s Square Arena, was converted back from a barracks.

A winger and centreman who averaged about a goal per game during his long career, in 1944, as the next world war was winding down, Duvall played his final game of organized hockey for Sheffield of the ORHA.

In the early days he played in the Galt Church League, but one of the rules was that players had to attend Sunday School at least three Sundays each month.

“I went for a while to the Baptist Church, then later switched to the United Church,” he said.

In 1932 he was admitted to hospital for the removal of five growths on his neck. “The doctor told me I’d have to stay in hospital for a week,” he said. “I told him I couldn’t because I had to pitch a ballgame that night.”

The operation was at 4 p.m. “I left the hospital with my neck all wrapped in bandages in spite of the doctor and nurses telling me I shouldn’t. I pitched nine innings at Victoria Park that night and we won the game 9-3.”

The next day he returned to the doctor to get the bandages changed. His team manager accompanied him, but fainted when the bandages were removed. The doctor had to first attend to the manager.

During one game in 1924 an opponent kicked him, the blade going through his leather skate almost to the bone. He carried a scar for the rest of his life from that.

“We didn’t have many extra players in those days and I had to keep on playing most of the game. My foot swelled up so much that if I had taken my skate boot off it wouldn’t have gone on again. When I finally did take it off, I pulled about half a cup of blood out.”

But as much as he loved playing, he will be remembered for his significant contributions as a coach and organizer.

He is credited with keeping youth hockey alive in Hespeler during the 1950s by personally sponsoring juvenile, junior and intermediate hockey teams.

One of those teams he sponsored captured a provincial junior title.

It happened in  1951 when the Hespeler Jr. D team won the Ontario Hockey Association Championship under his sponsorship tutelage.

“He was a good coach and we all respected him,” said Sam Inglis, a former player. “We really enjoyed playing for him.”

“He was a very stern coach, but friendly. We really respected him and the time he spent in Hespeler sports.” He also mentioned with fondness another longtime Hespeler contributor, Jack Courtney.

“Hespeler was a great sports community and Dubby was a big part of it,” said Inglis.

Many were the times when Duvall, having sponsored various teams, would present the year-end trophies to the teams and players at the end of the season.

Though his father had lived to the age of 103, in later life Dubby underwent some serious operations. He still liked to take out his hockey sweater and hockey stick, as well as his scrapbook, where he would look at hundreds of clippings which told the story of his long career.

When he died, he left behind his wife, the former Lillian Garner, sons George and Jerome (now deceased) and two daughters, Gloria and Patricia.

An honourary life member of both the ORHU and the ORSA, he is buried in Beaverdale’s Wanner Cemetery.