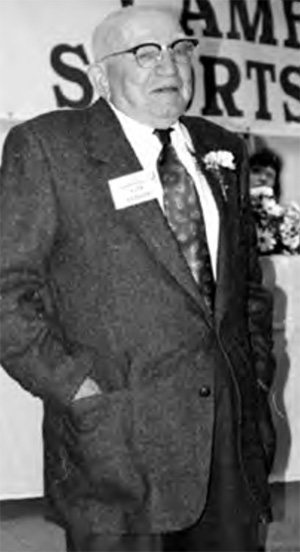 For years Tim Turow was a fixture at the annual Cambridge Sports Awards banquet, presenting the trophy that bears his name to the city’s top athlete.

The late Turow spent a lifetime involved in the local sporting life of our community, first in Preston, and later, in the amalgamated city of Cambridge.

Turow was born in the Ukraine in 1908, coming to Canada (Preston) with his family in 1913. He loved sports. As a youngster he played them all –– hockey, baseball, softball, football, bowling –– but always considered himself better at football than anything else.

After his playing days were over he moved into the coaching ranks.

Turow was coach of the 1948 Galt Terriers of the Intercounty Association, and later served as vice-president of the league to Otto Manske. Turow succeeded Manske, and still later, served as head of the Ontario Baseball Association.

Modest about his contributions, others sang his praises, including a former player he coached by the name of Tex Kaiser. Kaiser, who went on to play for the Montreal Canadiens, said everyone respected Turow. “He was always involved, never content to sit on his ass.”

But more importantly, Turow was always there for his players, willing to lend an ear, even in matters unrelated to baseball.

Turow guided Kaiser and the Preston juniors to the Ontario baseball finals in 1942. Turow’s connection to the baseball world also extended to umpiring, where he was regarded as a no-nonsense umpire, though always fair. He was also the first umpire many people saw who wore glasses. Intercounty colleague Larry Pennell from Brantford said Turow’s character shone through very clearly. “Tim spoke to your face exactly as he spoke behind your back.”

After serving as OBA president in the late 1950s he was eventually presented with an honourary life membership, something he took seriously, rarely missing an OBA meeting even in old age.

In his adult years he continued to excel at bowling, and also enjoyed golf. The most beloved person in the OBA, he had the trust of his players, his colleagues, and the community. He was known as a man always willing to offer encouragement.