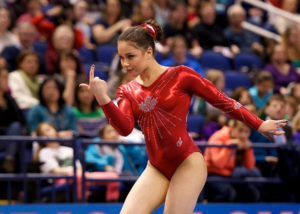 Her younger sister Brooklyn, also coached by Saadi, would go on to compete at the 2017 World Championships in Montreal.

Moors got her start under Saadi, herself a former Olympian who competed for russia at the 1976 Montreal Games, at an early age and in 2010 she competed at Elite Canada in Gatineau, Quebec.

Saadi has a long and successful coaching history in Canada. She coached a few Canadian Olympians including Cambridge’s Yvonne Tousek and Crystal Gilmore.

At that time Moors left the Cambridge Kips gymnastics club — the club founded by Don and Benita Rope many years earlier — to follow her coach Saadi, who had begun the Dynamo Gymnastics club, which was also located in Cambridge.

In January 2012 Moors competed at the London Prepares series, where Canada placed second and qualified a full team to the 2012 Summer Olympics. She contributed an all-around score of 54.282 and placed second in the floor final with a score of 14.200.

At the beginning of March, Moors placed fourth at the American Cup in New York City with an all-around score of 56.365.

Later in March, Moors competed at the Pacific Rim Championships in Everett, Washington. She contributed to the Canadian team’s bronze medal with an all-around score of 54.850. Individually, she placed sixth in the floor final with a score of 13.250.

In April, Moors won the silver medal in the floor final at the Artistic Gymnastics World Cup in Zibo, China, with a score of 14.025.

In May, Moors competed at the Canadian Championships in Regina, Saskatchewan. She tied for the silver medal in the all-around competition with a score of 56.300. In event finals, Moors placed second on uneven bars, scoring 13.650, and first on floor, scoring 14.600.

In the months prior to the Olympics, Moors had been performing well.

That summer, Moors hoped to be chosen as part of the five-member team that would represent Canada at the 2012 Summer Olympics. After she helped Canada qualify a full team in January, Moors said, “I never really thought about it. Now, I have my mind set and I’m motivated to get to the Olympics. I really want to go.”

At the end of June, Moors’ hard work and outstanding performances earned her a spot — one of 12 gymnasts chosen — to compete at the Final Olympic Selection meet in Gatineau, Quebec. On the first day of competition, she placed second in the all-around with a score of 55.000. Based on her performances there, and at the Canadian Championships, she was selected to the five-member Olympic team. It was a dream come true, but one she had trained for.

Said Moors, “I’m just so excited to be going to the Olympics. I’ve been doing my floor routine for several years, and it’s just a case of practice makes perfect. I’m still working to make it better.”

At the end of July, Moors contributed scores of 13.700 on uneven bars and 14.600 on floor toward the Canadian team’s fifth-place finish at the Olympics. “Our goal was to just finish top eight,” said Moors. “But coming to the Olympics and finishing fifth, we weren’t expecting that. It’s unreal right now. We upset a lot of big countries. We definitely raised the bar for Canada; we’re leaving a trail for the next people, and for Rio. We just decided to go out there and go strong.”

The following March, Moors competed for Canada in the FIG World Cup event in Worcester, Massachusetts, known as the American Cup, where she earned the highest score among the women on the floor with a score of 14.600 and won the bronze medal behind American gymnasts Katelyn Ohashi and Simone Biles with an all-around score of 57.066.

In August, Moors was the first female gymnast to perform a double-twisting double layout in international competition during her floor exercise routine at the Pan American Senior Apparatus Championship. At the 2013 World Artistic Gymnastics Championships in October, she finished 10th in the all-around.

The double-twisting double layout skill on floor exercise is now called the “Moors” in the Code of Points. It was, at the time, the only “I” skill (the newest and most difficult classification in women’s floor) in the code of points and has a difficulty of 0.9. Since Moors debuted the skill, it has only been successfully competed by four other gymnasts – Americans MyKayla Skinner, Jade Carey, Simone Biles, and Morgan Hurd.

That January, Moors was announced as a competitor for the 2014 American Cup (Greensboro, North Carolina) in early March. Then, in early February, she was named to the Canadian team that would compete at the Tokyo World Cup in April.

On 31 May 2015, she announced her retirement from the sport via an Instagram post, ending one of the most outstanding careers by a Cambridge gymnast. It was also signalled an end to the career of one of Canada’s best-ever gymnasts. 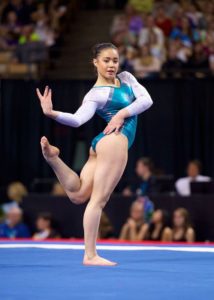